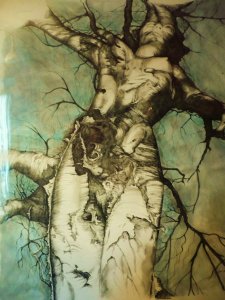 When the rather lovely Simon Bestwick (who is a proper writer, published and everything, eminently readable, humorous and supportive and general all round bundle of loveliness) was looking for authors to link to for this brilliant series of blogs, The Next Big Thing, he very generously asked me and other people I attended a horror writing weekend with if we would be interested. Sadly, there was only me that hadn’t been ‘got’. There are probably reasons for that but as today is my birthday WE ARE NOT GOING THERE and we are BEING KIND!

So I have to apologise to anyone who reads this and thinks, ‘but you’re not a proper writer.’ You’re quite right. I write somewhere in the region of 5-10,000 words most days but about 80% of that is for other people. What can I say. It pays the bills.

In actual fact however, as of yesterday I am a proper writer really. Yesterday I had my first rejection letter albeit by email!! Whooo hooo!! Now I’m getting somewhere! I happen to think it’s a good short story… it’s just erm … rather perverted and so has a limited readership. Well, it would probably have a wide readership among the kinky, the depraved and the weird. But hey, that’s what Kindles are for, right?

So I haven’t written a novel and I only have one short story published, but believe me, on my precious purple laptop there are enough short stories for several anthologies. I’m using this blog to tell you about the novel I am writing. It’s not quite halfway there and I am currently stuck, so this really won’t take very long will it? Just perch on a chair with half a cup of tea; that should do us.

1) What is the working title of your current/next book?

2) Where did the idea come from?

As you drive from West Hallam in Derbyshire to Bakewell (also in Derbyshire and home of the famous tart, and I don’t mean Katie Price, I mean an edible and non-plastic variety) there is a fabulous hill that rises like a giant breast on the landscape. The bottom half of the hill is covered in trees. The top is grassed. It just looks like a Bronze Age burial mound to me and I am bewitched by it every time I go past. It kind of got my creative juices flowing a few years ago. I had to wait for redundancy before I had the time to put finger to keyboard however.

3) What genre does your book fall under?

It’s a chiller, fantasy, mystery, horror kind of thingie. It has motorcyclists in it. And a demon or two. There is some nudity. And sex. It seems very grand to label it with it a genre when it hasn’t quite decided itself yet! Haha!

4) What actors would you choose to play the part of your characters in a movie rendition?

This touches on a problem because one of my main issues is the lead character Evie. I just don’t get her yet and so I don’t know who she is or who could play her. So this is an interesting exercise isn’t it? *scribbles in notebook*

5) What is the one-sentence synopsis of your book?

Evie’s husband Jason is missing presumed dead after a motorcycle accident, but she and his biker mates are not convinced he is dead and after a series of weird events on the hill that towers over the town where they live, they take on the weird village of Hollowbank in an effort to free Jason from the ancient powers that hold him, although they also have to do battle with their own emotions and demons before they can succeed.

6) Will your book be self-published or represented by an agency?

Obviously it’s going to be optioned by the biggest publishing house in the world and I will be able to afford a hot tub. And my mortgage …

7) How long did it take you to write the first draft?

I haven’t finished the first draft mainly because of the issues I’m having with the Evie character but hang tight friends. I will!

8) What other books would you compare this story to within your genre?

I think reading Tana French’s book In the Woods (2007) has given me the courage to write this. I didn’t love this book by any means but it did haunt me for a long time and I thought that her next book The Likeness was just phenomenal. If I would write half as well as that I’d be a happy lady!

There was a sense of mystery in In the Woods that I was really hopeful would go somewhere and it never quite did. Ms French is writing a different style of book to mine of course, but I want to have that feel that she had in the first half of In the Woods.

Also Alan Garner. An astounding writer. I love his work and I like the way he grounds reality with the magical, the fantastical and the downright weird.

9) Who or what inspired you to write this book?

I’ve always wanted to write and Shone and Grip are demanding to be written about. They are great characters and are coming from my heart. Walks in Shipley Park with the dogs really help the atmosphere too, as so much of this novel is set in a forest that’s misty and dripping with moisture. But that’s Derbyshire and actually many of the settings have been stolen from my time living on the Isle of Wight when I rode motorcycles myself. The fabulous winding roads and the dripping trees and that sense of isolation, and, I hate to say it, some VERY odd people.

There is also a strong sense within what I’m writing of finding an inner strength, getting in touch with the feminine self and vanquishing jealousy and that hideous competitiveness women sometimes have. Evie is supposed to be doing that … and maybe we’re doing it together but it’s not easy!

I can’t help but write this story. It pours out of me and makes my fingers tap the keyboard.

10) What else about the book might pique the reader’s interest?

There are tree spirits, hollow hills, a crazy character who is more like a jester, one angry bitch of a goddess and because I am The Writer’s Barn there will be an owl.

So that’s it. I may not be a real writer but I am a good apprentice. Thanks to Simon Bestwick for tagging me. I haven’t found anyone else to tag so I will give a shout out to The Urban Writers Forum and Charlie Haynes particularly for being such a big part of what has helped me write over the past six months. And if you are a writer and would like to be tagged give me a shout 🙂