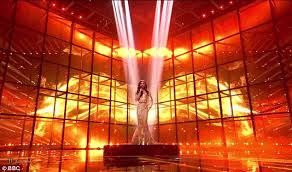 I watched Eurovision on Saturday (BBC One, 8 pm, Saturday 10th May). This is not an unusual occurrence, indeed I have loved Eurovision since I was a kid. The pure spectacle, the costumes and increasingly the staging of the show all stroke my inner happiness. It’s a special night full of laughter and tears (of mirth usually) followed by the usual banter about block voting and how predictable it all is.

I don’t take it seriously, I just enjoy it for what it is.

This year though I was moved – with real actual emotion – to tears. Having watched all of the acts perform, my husband and I duly registered votes for The Netherlands and Austria and then I waited with bated breath to see who would come out on top. What would Europe think of Conchita Wurst?

I hope I’m open minded always, but I must admit to doing a double take the first time I saw Conchita in her gold frock with that beard; but any doubts I had – that she was a gimmick maybe – were quickly dispelled when she started to sing. Great song, so fitting – fabulous performance. And the staging? Brilliant! I loved it all.

So while the votes were being counted, I held my breath. What would the UK say? Who would they vote for? What would Europe think?

Well it turns out that a Minister in Russia, Vladimir Zhirinovsky, told national TV stations that her win meant ‘the end of Europe’. He has supposedly stressed that ‘They [Europe] don’t have men and women any more. They have “it”. Russia’s views on homosexuality are of course well-known and that, coupled with their recent behaviour in the Ukraine, meant that unfortunately for their totally blameless young female singers on Saturday, the audience constantly booed whenever Russia received any points.

But the UK (along with many other European countries) gave their douze points to Conchita Wurst and Austria. I was totally speechless for a moment and so very, very thankful. I really felt the love. And that was without consuming any alcohol! If we are a country that is so open-minded and welcoming of such diverse kinds of people then why the hell does UKIP even exist? Why are we considering leaving Europe?

Such mixed messages from the UK. On the one hand there is so much right wing hatred around at the moment, so much about this country that is hard-core and uncaring, and on the other we’re a nation who rejoice in difference.

On Saturday, Conchita Wurst accepted her win graciously in the name of ‘everyone who believes in a future of peace and freedom. We are unity.’ Who knows what will happen when we go to the polls next week, but I for one really hope that all those lovely people who watched Eurovision with me on Saturday night and willed Conchita on to win and to ‘rise like a phoenix’ won’t be the ones who stay at home and don’t bother to have their say. This is not the time for voter apathy. The right wing and those who hold racist or extreme views will not be apathetic. Just because our leanings are more peaceful, caring and sharing and loving does not mean we should just let things be. Sometimes we do have to stand up and be counted.

We cannot afford to ostracise ourselves anymore in Europe and we have a duty to forthcoming generations not to let this insidious right wing malaise creep ever more into our society and national thought.